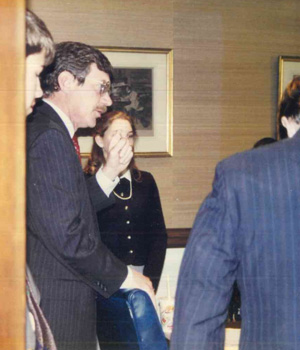 Steve coaches his team in 1995

For 14 seasons between 1994-95 and 2011-12, attorney Steve Schmidly mentored mock trial students at Asheboro High School. During that time, Asheboro High won an unprecedented 7 state championships (1996, 1999-2004), even earning 2nd in the nation in 2000. In late November, I had the distinct pleasure of speaking with Steve about his experiences as an attorney advisor. Here are some of the highlights of our conversation:

How did you get involved in the mock trial program?
The mock trial program began in 1993, and my daughter, Brooke, was on the Salem Academy team in 1993 and 1994. Watching her compete, I could see what a valuable experience it was for the students. When Mary Kelly, a wonderful teacher at Asheboro High School, approached me in 1995 and asked me to advise a team, I jumped at the opportunity. My father taught me the importance of giving back to the community, and what better way to do so than by helping with mock trial?

How many students participated at Asheboro High School?
We had one team the first year. After our second season, we had two teams every year, one for upperclassmen and one for underclassmen. Altogether I probably mentored nearly 250 students during my time at Asheboro. They were great kids, many of them active in sports, student government, drama, or cheerleading, too. Many of them went on to do mock trial in college, and several even got large college scholarships because of high school mock trial.

Have you kept in touch with many of them?
Oh, yes; I think I’ve heard from nearly everyone in the past year. We communicate via Facebook or they visit me when they are home. And all of them, without exception, say that mock trial was the most important activity they did in high school. That’s true whether they went into law as a profession or an entirely different field.

How many of your former students practice law?
Twelve of them are practicing attorneys, with several of the current undergraduates expressing an interest in law school. I’d say only 5% or so enter the legal profession. Of course mock trial was very helpful for them, making them more at ease in the courtroom as attorneys. I also know of two doctors, a nuclear physicist, 2 vocalists on Broadway, a news anchor at WNCN (Sean Maroney), several PhDs, and a plumber‚ so mock trial benefits a wide range of kids.

A nuclear physicist!? How did mock trial benefit him?
He’s doing post-doctoral work at Cornell right now. Last time I spoke with him, he told me that the difference between him and the other “eggheads” at Cornell is that he knows how to talk persuasively with others about his research. He attributes his communication skills to mock trial. That’s true for many of my former students. Mock trial teaches students to take facts, develop a persuasive argument for either side, and deliver it in a way that convinces people you are right.

What are some of the other lessons students learn through mock trial?
The importance of preparation. Mock trial taught my students that they have to work hard to be successful, that it takes lots of time and effort. They should always do their best. That’s an important life skill for any profession. Now, sometimes they’ll win and sometimes they’ll lose; they can’t control the outcome. But they can learn how to deal with setbacks in a constructive way, and to be professional. They always shook hands with their opponents after the round and treated them with respect. As a result, they formed long-lasting friendships, both with their own teammates and with students they met on other teams. We had a lot of fun together.

The CCCE wishes to extend our deepest gratitude to Steve Schmidly for his years of dedication to his students and to the NCAJ mock trial program. To learn how you can become involved, contact me at SueHeathJohnson@gmail.com. Check back next week for the rest of our interview with Steve.