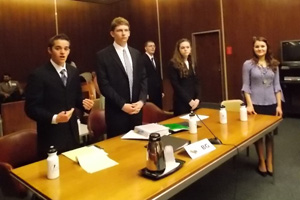 From May 8 ‚Äì 12, 2013 North Carolina state champion Central Carolina Homeschoolers participated in the National High School Mock Trial Championship in Indianapolis, Indiana. Forty-eight teams from 43 states as well as from Guam, the Northern Marianas Islands, and South Korea converged on the beautiful JW Marriott in downtown Indianapolis. North Carolina team members were accompanied by numerous friends and family who lent support and encouragement.

One vocal supporter was Lydia Boyette, a member of the team in 2011-12, its inaugural season. Lydia shares her insights about the team‚Äôs experiences at Nationals: ‚ÄúWhen the clock struck midnight on April 1, 2013, members of Central Carolina Homeschoolers (CCH) Mock Trial Team were already anxiously awaiting the release of the 2013 National High School Mock Trial Competition case online. Full of excitement, many members of the team stayed up late to finish reading the case the very night it came out.

‚ÄúVintage Theater Productions vs. Pro Propane Products was the name of the game. Loosely based on an historical event, the case revolved around determining liability in a propane tank explosion at Vintage Theater. Jo Kerr, an employee at Vintage, knocked with a wrench on a propane tank used for a popcorn warmer to open the valve, which she claimed was rusty. When examined after the explosion, one of the tanks was reported to have rust and traces of anhydrous ammonia, a chemical used in forming methamphetamine. A former employee of Pro Propane Products was convicted of selling methamphetamine after leaving the company. Was the tank damaged by the negligence of Vintage Theater Productions‚Äô own employee, or was it damaged as a result of its use in methamphetamine production and improper storage inside an unventilated room at the theater?

‚ÄúHours and hours each day during the month of April were spent practicing! [To prepare for competition, the team arranged scrimmages with the Tennessee and South Carolina teams prior to leaving home. Upon arriving in Indiana, the CCH scrimmaged] teams from Georgia, Minnesota, and New Hampshire. A surprise came for the team members when their first round opponent was the New Hampshire team! [The team argued for the plaintiff three times and defense once, also facing strong teams from Arkansas, New Jersey, and Michigan.]

‚ÄúAt the awards ceremony at the JW Marriott Hotel in the heart of Indianapolis, the grand ballroom was decked out in theater decorations identifying with the national case. Drake Smith, a senior, won one of the top ten witnesses in the nation for his credible portrayal of an expert witness on both sides of the case. Andrew Kelly, also a senior, won a top ten attorney award for his natural abilities to handle difficult witnesses, to form extemporaneous closings, and to argue objections with ease. As the team placements were finally revealed, CCH mock trial team was waiting excitedly and expectantly. ‚ÄòAnd eighth place in America is‚Ä¶‚Ä¶.. North Carolina.‚Äô Cheers and applause erupted from the three tables occupied by CCH members, their families, and friends. Darren Allen, CCH’s attorney coach and assistant district attorney of Montgomery County, and Alice Boyette, teacher coach, small-business owner, and home educator, could not be more proud of the team members’ hard work and dedication.

The CCCE wishes to congratulate the Central Carolina Homeschoolers for their success; they represented our great state with integrity and excellence! To see the results, visit http://www.inmocktrial.org/2013Nationals.aspx and click on ‚Äú2013 NHSMTC Final Results.‚Äù