From May 7-11, the Central Carolina Homeschoolers – our state champions for the second year in a row – proudly represented North Carolina at the National High School Mock Trial Championship in Madison, Wisconsin. Forty-six teams from 43 states, Guam, the Northern Marianas Islands, and South Korea converged on the charming state capital. Situated on an isthmus between two lakes, downtown Madison provided a lovely venue for the competition. Rounds were held at the Dane County Courthouse and in the state capitol building, which boasts the only granite dome in the United States. The interior of the building is magnificent, featuring forty-three varieties of stone from around the world, decorative murals, enormous glass mosaics and hand-carved furniture: an inspiring setting for these future leaders.

Students had only five weeks to prepare for trial in the case of Estate of George Romero v. Ashley Williams. In this civil trial, the Romero estate sued Williams for the wrongful death of Romero after he consumed a chemical prepared for him by Williams, ostensibly to counteract the effect of caffeinated sports drinks on Romero’s weakened heart. In the course of their preparations, students learned about 5K “zombie runs,” medical examiners, drug abuse effects, and start-up companies.

The team arrived in Madison on Wednesday and immediately jumped right into competition mode, scrimmaging with New Mexico and Colorado that very day. They did enjoy the sights of Madison in between scrimmaging two more teams (Indiana and Ohio) on Thursday. At the Thursday evening pin exchange, all of the students made new friends as they exchanged memorabilia with the other attendees and took photos with the University of Wisconsin Marching Band and Bucky the Badger mascot.

On Friday and Saturday, the team competed against students from Maine, Kansas, Georgia, and Arizona. Two of their rounds took place in the capitol building: one in the Senate Chamber, and the other in a fourth floor hearing room. Team co-captain Sarah Boyette remarked, “The most memorable round for me was competing in the Senate Chamber in the capital building. It was a circular shaped room with beautiful dark stained desks and art work painted directly on the walls with natural light flowing in from above. The judges sat in front on a raised platform. The impressive surroundings left me in awe and made the trial feel very important.” 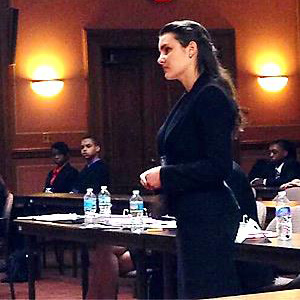 Co-captain Rachel Cline adds, “The high caliber of competition at Nationals is what makes the rounds so intense. Throughout the Nationals week we went against eight state champions between two days of scrimmages and two days of competition. Every team we faced had a unique, but crystal clear strategy in pairing down and presenting the evidence provided by the problem. Following each team’s theory throughout the trial was like constructing a puzzle; the opening statement was the center of the puzzle picture. Every direct point and ‘gotcha’ cross moment was a piece added to build the puzzle, until closing came along to add the outside borders to complete the puzzle.

Continuing, Rachel elaborates, “Back and forth objection battles were one of my favorite parts of our rounds at Nationals. The explanations of why and how the Rules of Evidence related to the problem were stimulating. I’m convinced every attorney we argued against could have kept asking, ‘Your Honor, may I be heard?’ for hours had the judge allowed.”

The North Carolina champions did an excellent job, winning two of four rounds (7 of 12 ballots) and losing the others by slim margins, finishing in 20th place overall. At the Awards ceremony, Rachel Cline earned one of only 10 Best Attorney awards among the 400 students competing at Nationals. Numerous family members and friends were present to support and cheer Rachel and the team on.

Thanks to the numerous attorney and community volunteers, all the participants came away from Nationals with nothing but compliments for their hosts. As Hannah Presnell stated, “Nationals this year was a wonderful experience. I had the opportunity to visit the beautiful city of Madison and compete against some of the most elite teams in the country.” Sarah Boyette agrees: “Madison was a lovely city with many unique shops and restaurants.” New team member Aaron Presnell adds “My first trip to Nationals was an amazing experience! I made so many new friends and enjoyed competing.”

Teacher coach Alice Boyette sums up the team’s experiences: “Representing North Carolina at nationals was an honor for our team. We received the case on April 1 and worked hard to get everything together quickly. We have spent so much time together and become so close over the years that we call the team our ‘mock’ family. I am proud to be the teacher coach to this great group of teenagers.”

The CCCE wishes to congratulate the Central Carolina Homeschoolers for their success in advancing to Nationals for the second time, putting in yet another solid performance. To see all of the competition results, visit http://www.nationalmocktrial.org/.