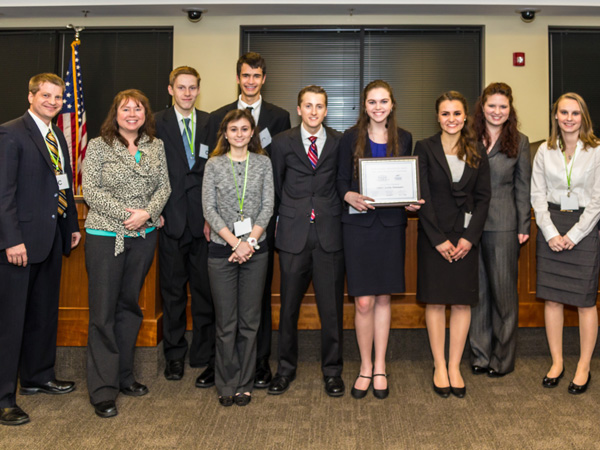 On Friday, February 28, 2014 the eight Regional mock trial champions converged upon Campbell Law School in Raleigh, five-time host of the state finals competition. Before engaging in their own legal battles, the students toured the North Carolina Supreme Court, where they learned about appellate advocacy and the making of legal precedent in North Carolina. Justices Mark D. Martin, Robert H. Edmunds, Jr., and Paul M. Newby inspired the students with stories from N.C. legal history as well offering advice for those students desiring to become attorneys. Returning to Campbell Law, the students were greeted by Campbell Dean J. Rich Leonard before the presentation of the M. Gordon Widenhouse Jr. Award for Visionary Leadership‚Äù (story below). After tours of the law school led by Campbell Law students who devoted part of their spring break to serving as gracious hosts, the participants proceeded to the evening reception to enjoy food and fellowship. To conclude the festivities, NCAJ President David Teddy inspired the students to work hard, relating stories from his own experience as a law student and attorney. He encouraged them not to give up on their dreams, but to know that with determination, great things are possible.

On Saturday, March 1, the students displayed impressive legal knowledge and convincing witness portrayals as they advocated once on each side of the criminal case State of Utopia v. Quinn Penner. At the end of the two preliminary rounds, eight students earned Best Attorney and Best Witness awards. Sean Maroney, former mocker on the state champion teams from Asheboro High School, congratulated the students on their accomplishments; then all waited with hearts pounding for the announcement of the two finalists: J. H. Rose Green‚ and Central Carolina Homeschoolers (the 2013 State Champions).

As the Honorable Justice Robert H. Edmunds, Jr. presided over (and scored) the championship round, the students argued the case with passion and professionalism before the prestigious jury panel of Janet Ward Black, S. Quon Bridges, Burton Craige, N. Lorrin Freeman, Dick Taylor, and David Teddy. In the end, the Central Carolina Homeschoolers were again declared State Champion on split ballots, earning the right to represent North Carolina at the National High School Mock Trial tournament in Madison, Wisconsin in May. Congratulations to the Central Carolina Homeschoolers and all eight regional champions for their accomplishments this year!

THANK YOU to the STATE FINALS HOST, CAMPBELL LAW SCHOOL; STATE FINALS SPONSOR, RUDOLF WIDENHOUSE & FIALKO; and the many legal professionals who volunteered their time as presiding judges, scoring jurors, and site volunteers at the State Finals competition! Over forty judges and attorneys and a dozen paralegals and other individuals devoted their Saturday to serving at state finals. For a complete list of judges and jurors, go to State Finals Judges and Jurors. Their willingness to invest in the students is greatly appreciated!