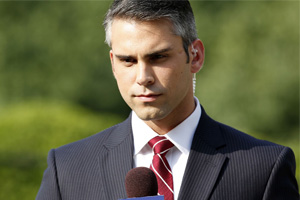 I count myself lucky. I basically get to compete in Mock Trial every day at my job. If you’ve ever had the hot lights on you and a camera with its red light blinking in your face, you know what I’m talking about. The thrill of live television certainly provides the rush that a Mock Trial competition affords. Not only that, but every interview is a cross-examination to some extent.

For those of you who coach and those who have competed as students, you all know that participation in Mock Trial is no guarantee that someone will go into law. I look back at my own teammates and currently see a vast array of professionals, including doctors, electricians, and scientists, as well as attorneys.

The beauty of Mock Trial is that it exposes you to, and then helps you mature, two skill sets: 1) working as a team; and 2) being self-reliant. Those two things, seemingly at odds but actually working hand in hand, will allow you to succeed anywhere in life, especially in the work place.

Mock Trial helped me buy into the concept that the success of the team is paramount and that no role is beneath you, whether you’re making copies of exhibits for your co-counsel or presenting those exhibits to the court; or whether you’re rolling the teleprompter or reading the words from the anchor desk. If any link in the chain is missing, the whole thing will collapse.

Back at my time competing with Asheboro High School, we believed passionately in the team. That’s why students who were captains of their sports, valedictorians, club presidents and many times working part-time jobs to save for cars, college, etc. would spend countless additional hours of their own time poring over the case materials, writing arguments, rehearsing lines of questioning together and memorizing law. We all wanted the team to succeed. For that to happen, Mock Trial taught me that you need to be the understudy of every role.

On each successful Mock Trial team, I would bet that every participant, while specializing in his or her own specific task‚ knows the case and roles so well that he or she could step in at a moment’s notice. It’s amazing to me how foreign of a concept this is in the real world. You might not know the whole job, but a lot of times, you probably know enough to help out if needed. “That’s not my job” is a phrase I hear to this day. It frustrates me because that type of selfish thinking hurts the final product, and at the very least, it damages the group’s morale. Mock Trialers get that their job is the team’s success, and managers most definitely notice that attitude when those students graduate into the workforce.

That said, the second skill of being self-reliant is equally important. Mock Trial teaches us that a team is only as strong as its parts. You can’t hide behind the team. Each person must shine in his or her own way. When you’re on the stand, all eyes are on you. When you’re standing before the judge and jury, all eyes are on you. It’s a level of responsibility most people either run away from or never get in their lives. Mock Trial students get the opportunity to experience it at an early age. No one is going to bail you out (pardon the pun) if you crash and burn in front of the judge during competition. You have to be prepared because at a certain point, you can’t rely on whispered conversations at the counsel table.

I try to bring that level of preparation each day to my job, whether I’m talking to a store owner on South Street outside downtown Raleigh or posing questions to President Karzai in Kabul. Just as the judges at competition know if a student isn’t prepared, my interview subjects, and ultimately the audience, will know if I’m not prepared. Mock Trial taught me to go the extra mile in doing my homework and to think critically about a subject.

Much can be said for Mock Trial helping students become better public speakers. Maybe you’re a product of this mindset. You’ll get no argument from me; it certainly does. But I challenge you to see those skills I mentioned reflected in your life or the lives of your students. No matter the profession, there’s a sort of “Mock Trial Mafia” that positively impacts communities, both inside and outside our state. And having some understanding of the law and being able to share it with the general public in what you do certainly doesn’t hurt.

Sean is a former Islamabad bureau chief and Pentagon correspondent for the Voice of America. He now anchors at station WNCN. Sean graduated from Asheboro High School (2002), where he was a three-time state champion and a national runner-up in Mock Trial. You can reach him at smaroney@wncn.com.